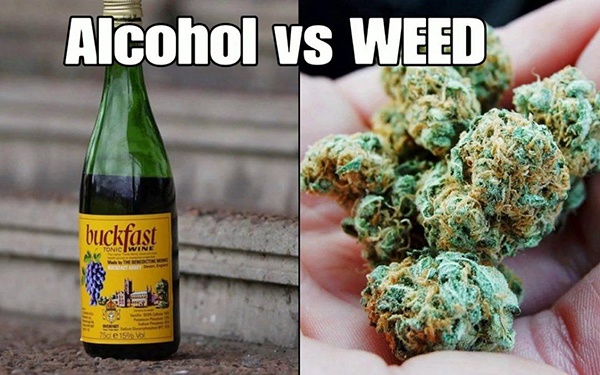 Cannabis and alcohol both have been used by practically every culture for millennia. Both occur naturally without intervention and have played prominent roles is just about every facet of human society at one time or another: from their appreciable roles in scientific innovations to religious practices across the globe. Both have a strong capacity for altering consciousness, but is one of them quantifiably more dangerous than the other? Let’s take a look and find out.

One of the most popular pieces of information – and rightly so – often considered in this debate is the recorded number of alcohol-related deaths compared to the same figures for Cannabis. In the United States in 2014 alone, 30,722 deaths were reported to have been caused by alcohol – and that doesn’t even include drinking-related accidents or homicides. With those figures added, the death toll comes closer to 90,000. In a year. In the U.S. alone.

Let’s compare those 2014 statistics to the number of Cannabis-related deaths in 2014: zero. Yep, as it turns out you can’t die from imbibing too much, and it seems that even extreme incidents of “over-intoxication” will lead to nothing more than a temporary bout of paranoia or lethargy. Compare that to alcohol’s standard incidence of impaired driving or domestic violence that very often lead to homicide and self-harm, whether intentional or not.

Oh, and guess what? The National Highway Traffic Safety Administration published a recent study showing that having a detectable amount of THC in your blood did not increase the risk of being involved in a car crash. Word to your mother, she should still let you borrow the minivan. Alcohol, of course, is a bit different. Having a blood-alcohol content of at least 0.05% increases the likelihood of a crash by 575%.

I think we could stop here for a winner, really, but let’s go on.

It’s been well established that excessive drinking has long-term effects, maybe the worst of which is cancer. The US Department of Health lists alcohol as a carcinogen and research by the National Cancer Institute suggests that the more alcohol you drink, the more susceptible to cancer you are – with regular consumption being the most hazardous.

Myths about Cannabis’s association with lung cancer have been methodically debunked. The American Journal of Public Health conducted a 16-year study of more than 65,000 Americans, and concluded that healthy cannabis smokers were not more likely to die earlier than people who did not imbibe.

Beyond all of that is the somewhat recent discovery that Cannabis compounds induce something called apoptosis in the human body. The term means “mitigated cell death” and is used to describe the rather miraculous ability the body has to identify and destroy harmful cells like viruses and even cancers! That’s right. Cannabis has been proven to be extremely effective in fighting certain cancers. That brings the score to two-zero by my count.

This is very different from a physical addiction where the body is actually dependent on an outside chemical to survive. Benzodiazepines like Xanax are a great example. A person on a high enough regular dose can die from the withdrawal of not having it. Alcohol is no different with regular enough use. Cannabis, on the other hand, does not have this extremely dangerous quality, and should not be lumped into this same category of “addictive” substances.

It is interesting to point out that there was a time not too long ago where doctors actually did prescribe whiskey and the like for a number of medical conditions. Prohibition was an interesting time, and the decades surrounding it were formative years, for both the upbringing of a new standard of medicine and the marketed decline of the traditional pharmacopoeia. Until the oil magnate J. D. Rockefeller introduced petroleum derivatives as a medicine, plants were the medical standard and had always been. Thank Jah they’re becoming mainstream again.

Having a doctor recommend alcohol is a laughable matter today, and the same would have been said about Cannabis just a decade ago. The tides have shifted, and Cannabis legalization has swept the world with impressive immediacy. Thirty of the U.S.’s fifty states have legalized in some manner and so have entire countries like Canada and Georgia, with more countries speculated to make the transition with equal fervor.

This, of course, has come on the tail of a medical boom for the plant, who’s Schedule 1 status made it next to impossible to study in the US until very recently. After just a few years of surprising scientific findings (and perhaps more surprising financial motivations) Cannabis has gone from a nefarious street drug to a wonder-cure for a tremendous application of medical maladies. Depression, insomnia, arthritis, PTSD and fibromyalgia are just a few of these that are often hard to treat with standard pharmaceuticals.

Cannabis for the win! As much as I like alcohol, reefer is the clear choice for heath concerns, though the social standards we have in place have yet to really make a shift to support it. Bars stay open till 2 AM serving liquor, but getting caught smoking outside of your house can land you in jail.