If you’ve watched the ever growing cannabis industry over the years, you’ve probably heard of the company Puffco along with it’s large array of smoking products. In this article we will be talking not only about where it stands today, but where it began, as well as the devices they’ve produced throughout the years.

A lot of cannabis enthusiasts would say that the norm of most consumption methods would be a joint, a spoon pipe, or quite possibly a waterpipe. Even by todays standards smoking cannabis traditionally is still enjoyed by many people, however in 2013 a man named Roger Volodarsky changed the game and had ushered in the new era of smoking. Today you can find so many types of electric smoking devices, however Puffco is definitely the “Godfather” of E-rigs. 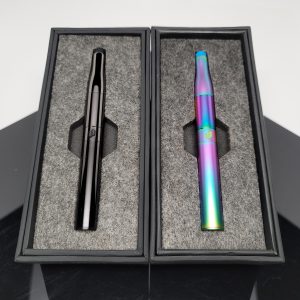 This pen is where it all began. In 2013 the first ever Puffco Plus was released and it absolutely set the standard for every hash pen. There weren’t really any pens that had an atomizer that differed from the typical coil, which at the time were mainly wire wrapped around a small piece of quartz or glass.

Where as the Plus featured a seamless ceramic bowl which made it easier to keep clean as well as giving the pen a more efficient burn. While most pens only stayed at one power setting, the Plus had multiple heat settings which could be changed by hitting the power button four times and a sesh mode which could be activated by hitting the button two times.

Since 2013 the Puffco Plus has been given a face lift and more reliable components which can be found in most headshops to this day. With the creation of this device it had then the inspiration the one of the most iconic Puffco products we use today and the atomizer itself is now the staple of all atomizers for pens and rigs. 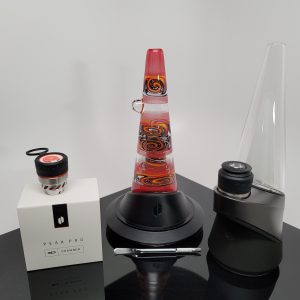 With the “high” success of the Plus and the even higher demand for the newest of the new, Puffco then moved on to what is considered the flagship of their product line, The Puffco Peak. Unlike traditional dab rigs the Peak didn’t require a torch nor did it have a complex learning curve.

It had multiple temperature settings, water filtration, a carb cap, and it even comes with a loading tool. When this came out in 2018 it was ahead of it’s time mainly because most electronic rigs had to be plugged in and attached to the joint of a full glass rig. So having the Peak was revolutionary for any concentrate connoisseur on the go, especially considering maintenance wasn’t too difficult to keep up with as well.

The Peak had many after market parts that came along with it as well such as the travel pack which could hold swabs and dab tools which also featured a silicone mouth piece, as well as after market cups that came in different material types. Because this device was so modular it became very popular with all types of smokers, and will be revered as the number one dabbing device to this day. 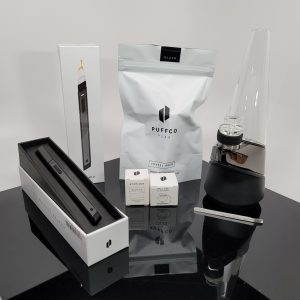 The very first peak was an absolute hit, and with limited edition models becoming popular as collectables it was only a matter of time until the devices were also updated. Bringing us to 2020 the new and improved Peak Pro hit the shelves and came with some pretty fantastic features.

Now users could create their own temperature pre-sets to get their own personalized dab experience, as well as visually being able to customize their Peak Pro with it’s internal LED lights which can also be color coded to your temp pre-sets. Not only that but you could change the temperature to the single degree as well as setting the heat times to really hone in on what you like specifically.

The carb cap had taken on a new look also, now with the oculus carb cap the Peak Pro can spin terp pearls completely stock. The Peak Pro is also not only an E-rig it is a Smart Rig too, featuring Bluetooth compatibility and its very own Puffco app you can utilize all of its abilities from your phone or tablet.

Not only that but the Peak Pro also can be wirelessly charged with the Power Dock that you can purchase after market and typically has a great battery life. Additionally, another great product to pair with your Peak pro is the Puffco Hot Knife. The Hot Knife is an electronic dab tool that has a heated tip to make loading the chamber on your Peak one hundred times easier, and is definitely a must have.

If you thought that was as good as it gets you’re about to be surprised because you can also get the new 3D Chamber for your Pro which will make it a more accurate device and resemble the hit of a traditional rig when it comes to temperature. If you desire even more resemblance to a traditional rig then you can also outfit your device with a custom glass attachment to really bring it all together, which many glass artists that you may know and love create all the time. 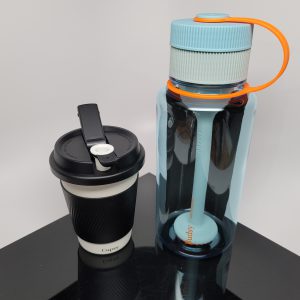 While the always growing line of Puffco products usually stays on the electronic side of things, The Budsy (released in 2021) and the Cupsy (which came out in 2022) were more of a bong in disguise. Both have a flip-up mouth piece which reveals the hidden bowl underneath.

If you prefer a different bowl they can take a 14mm bowl or banger, but the lid can only conceal the bowl it comes with. So if you enjoy camping, hiking, or just want to smoke in an incognito fashion, then either of these sneaky smoking apparatus will suffice. 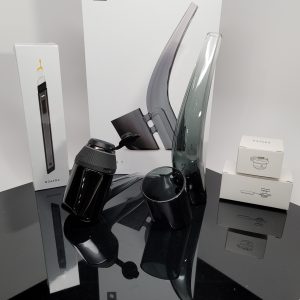 The most up to date product that Puffco has released is the Proxy and its definitely a versatile piece of tech to say the least. Being a 38mm diameter cylinder it can have so many glass attachments made for it, whether it be a dab rig or a dry dab device. Having a 3D atomizer come stock makes this device even better. So if you still want a puffco but want to be different then i would highly consider the Puffco Proxy.