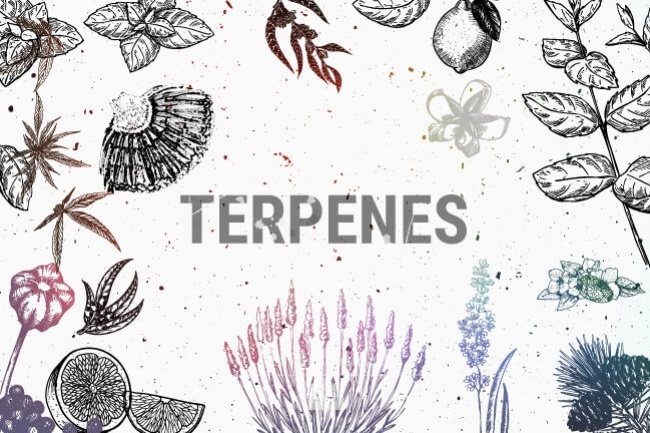 Terpenes are a group of aromatic and rich essential oils. Terpenes are most commonly found in cannabinoids like THC, hemp and CBD, as well as many common fruits and plant varieties. Terpenes are incredibly common in the world today, and many studies have backed their propensity to support health and wellness in multiple different ways. This is largely because terpenes naturally enrich all of the foods and plants that they’re found in. While more than 200 varieties of terpenes are in existence today, some are much more prevalent, while others aren’t so common. Today’s smoke shop guide outlines nine of the most popular terpenes around, possible benefits that they offer, and the most common sources that they’re found in.

While other terpenes are more frequently found in plants, Myrcene is one of the most frequently found terpenes in cannabis – so the next time you light up a water pipe, you’re likely to inhale a little Myrcene. It’s also prevalent in derivatives like CBD that can be purchased at your local smoke shop. Interestingly, the presence of Myrcene is what delineates Sativa plants from Indicas. Myrcene allegedly reduces reduces muscle tension, inflammation, and levels of physical pain. It carries a lovely scent – somewhat citrusy, with a subtle hint of musk.

Pinene is found more in nature than every other existing terpene type. Pinene is found in an expansive selection of plants, including – you guessed it – pine trees. Pinene has boosted the health of rodents, improving their lung function and helping to reduce their symptoms of inflammation. It’s also abundant in antioxidant supply and anti-proliferative effects, meaning that it can help to mitigate tumor growth in some instances.

If you take a whiff of humulene, you may detect the scent of hops, well-known by craft brewery fans. Humulene is among the most abundant terpenes found in hemp. Like many of the other terpenes we’ve mentioned, research suggests that humulene can help to kill bacteria, fight inflammation, and even slow the growth of tumors.

Caryophyllene can be found in a number of plant types – including edible ones. Spicy and peppery in flavor, caryophyllene is present in cinnamon, cloves and black pepper. Many household herbs are also known to contain caryophyllene including basil, oregano, hops and rosemary. The National Institute of Health has shown in several studies that caryophyllene has the potential to improve symptoms of depression, alcohol cravings, carcinogens, respiratory difficulties and anxiety. It’s a popular ingredient in topicals and salves, including those sold at most head shops. Caryophyllene is a valued component of topicals, largely due to its ability to reduce inflammation in some users.

Shut your eyes, and take a deep breath while imagining a freshly squeezed lemon. The scent you just conjured is derived from Limonene. Lemons contain an significant supply of Limonene, which can also be found in other citrusy fruits like oranges and limes. That’s what gives it that lovely, citrus scent. If that sweet summertime smell makes you smile, rest assured that you aren’t alone. Studies show that limonene is linked to improved moods and stress reduction amongst its consumers. Limonene has the ability to slow the growth of fungi and bacteria. Furthermore, consuming limonene may help the human body to better absorb more terpenes overall through the digestive tract and skin.

Arid and aromatic, linalool is a flowery terpene which is revered for its potential benefits in stress relief. A great deal of anecdotal evidence is reported by users with anxiety, insomnia and depression – advocates speak to its effectiveness in aiding symptoms of all three. While research has not empirically supported its ability to alleviate mental health symptoms, a study by the National Institute of Health attested to the antipsychotic and anticonvulsant properties found in Linalool.

Bisabolol is most commonly found in chamomile flowers- which may be evident by its lovely floral fragrance. A few other plants also contain this terpene, including the Brazilian tree candeia and hemp. Bisabolol is thought to lower rates of carcinogens, microbial growth, respiratory difficulties and inflammation. Irritation of the skin can also be aided by Bisabolol. Amazingly, some studies show that it can even help promote the death of cancerous cells In multicellular life forms. This process is known as apoptosis, which happens as a natural progression involving the reuse of cellular machinery.

Plenty of popular plants and foods contain a range of terpenes – and popular cannabinoids are no exception. While the proportions of individual terpene supply in hemp and CBD products may vary, terpenes enrich the quality of these products, and all of the foods and plants they’re found in. 710Pipes carries all of the products you need, like JUULs and other vaporizers, rolling papers, dab rigs, accessories and so much more! And while we don’t sell cannabis at our smoke shops, terpenes can be found in our line of CBD products. Stop by our Northglenn head shop between 8AM-10PM, seven days a week. We have two Denver pipe shops open daily from 12-8PM (11AM-9PM Thursdays through Saturdays) – on Colfax and on Evans near DU. Denver University students get 10% off with a valid student ID!