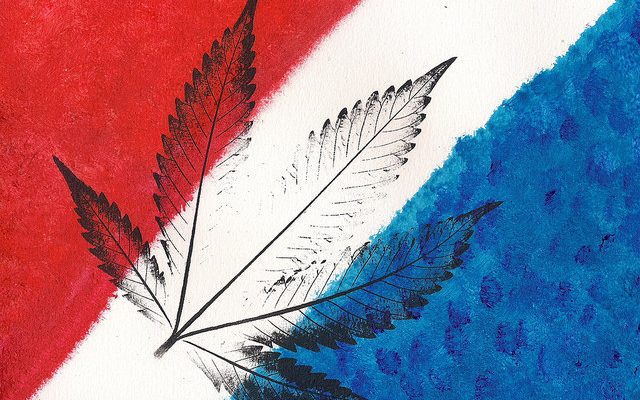 We all know that the founding fathers were industrious and pragmatic men. Benjamin Franklin literally wrote the book on practicality – with his famous work “An American Life” still quoted to this day.

“Early to bed and early to rise makes a man healthy, wealthy and wise.”

It should therefore come as no surprise that some of our nation’s most honored founders were enamored with a plant that was equally practical, industrious and versatile – hemp. Last week, we reviewed the official stances of twelve top Presidential candidates on cannabis and its most popular derivaties. Now that we’ve peered into our nation’s prospective future, it only seems fair to revisit its earliest days – and to set the record straight on popular claims about our forefathers’ feelings on cannabis.

In a 2001 film, How High, rappers Redman and Method Man portray college students that stumble upon an American history covered up – namely that the founding fathers were massive stoners that designed early machines for the ingestion of Cannabis.

Strangely enough, the story has some vein of truth to it and interested investigators won’t have to look hard to find it, though they might be surprised at what they discover. The journals and correspondence of several of our nation’s most prominent leaders speak extensively about the importance of the hemp plant for a myriad of applications. These journals and other texts include documents from Benjamin Franklin, Thomas Jefferson and George Washington, to name just a few.

As entertaining as it may be to watch popstars commune with the dead Ben Franklin and take hits from his water pipe, it may confuse viewers to the actual history of hemp’s prolific use in early America.

Oft-quoted claims that the founding fathers smoked cannabis further blur the line between fact and fiction. One article from a 1970s underground magazine called The Seed contibuted significantly to the misinformation permeating stoner culture.
The Seed’s article confused many readers in its day with a list of phony references to made-up quotations, and likewise validates itself with the qualifications of an imaginary doctor from an institution that never existed. Keep in mind, it was harder for the general public to discern bogus claims from credible ones without the internet at everyone’s fingertips.

The popularity of misinformation and inaccurate quotations unfortunately detracts from the believability of true claims. Culture Magazine sets the record straight with some quotes recognized by Mount Vernon, Washington’s estate. From George Washington, in a 1794 letter to William Pierce:

“Make the most you can of [hemp], by sowing them again in drills!”

And from his journal:

“Let the ground be well prepared, and the Seed be sown in April. The Hemp may be sown any where.”

It’s even suspected that Washington cultivated Hemp for smoking, journaling his disappointment after not separating the male from female plants in time:

“Pulling up the (male) hemp. Was too late for the blossom hemp by three weeks or a month.”

Separating male from female plants is a necessary part of cultivating the flower – the part of the plant which contains almost all of the psychoactive compounds. This practice is still employed today, as even one male in a garden will stunt the flowering of the females through pollination and greatly diminish the potency of the flowers. We can only guess that this is what Washington had in mind. What is certain is the prolific use of hemp at the time for industrial applications, the most important of which may have been National Security.

“(Hemp) is of first Necessity to the Commerce and Marine in other Words to the Wealth and Protection of the Country.”

These words often attributed to Thomas Jefferson were actually found in a letter written to, not by, the former president. They were, however, stated by another founding father and American statesman, Gouverneur Morris, and offer a glimpse into the importance of the material to the Navy.

For centuries following the founding of this nation, the Navy and it’s allies have been the heart and soul of US commerce, expansion and defense – and the Navy depended on hemp for it’s ropes and sails as a necessity.

The Word ‘Canvas’ has Interesting Roots – Cannabis Roots, that is…

Hemp happens to be the strongest natural fiber on Earth. It was used to make the only rope able to withstand resisting the winds against massive sails that carried persons and wares across vast, uncharted oceans.

Hemp was considered such a necessity to the vitality of early American settlements that it provoked one of early Americas first laws in America’s very first settlement. Jamestown was the first to pass legislation that required everyone to grow Hemp, but other colonies in Massachusetts and Connecticut were soon to follow. That’s right, refusal to grow the sacred herb was a crime punishable by prison! Many Denver locals – myself included – tout our status as true fans of cannabis, and derivatives like CBD and hemp.

Still, legally mandating the growth of hemp by everyday citizens is a level of devotion that’s hard for even a smoke shop regular like myself to conceptualize. Threatening Deitch and Herdon make wonderful points, but it’s the LA Times who’s research uncovered the extent of hemp’s prolific use in America’s early days. Not only was hemp often used to barter, but it was actually an acceptable currency amongst citizens – even accepted by the Federal government as a form of payment for taxes! Sadly, our nation lost its love of hemp following the criminalization of its growth under the 1939 Marijuana Tax Act. At long last, the 2018 Farm Bill returns the legal right for American farmers to cultivate hemp for profit – to the immense joy and relief of its vocal proponents. The increasing supply of locally grown hemp is incredibly promising for many American industries, as hemp is more versatile, practical, and cost effective than countless alternative materials. America holds deep, historic roots in an early love of hemp – by our founding fathers, and by colonists across the land.

710Pipes has plenty of quality hemp products in store – including a variety of bags and wearables. We also carry vaporizers, pipes, water pipes and so much more! Stop by our Northglenn head shop between 8AM-10PM, seven days a week. We have two Denver pipe shops open daily from 12-8PM (11AM-9PM Thursdays through Saturdays) – on Colfax and on Evans near DU. Denver University students get 10% off with a valid student ID!