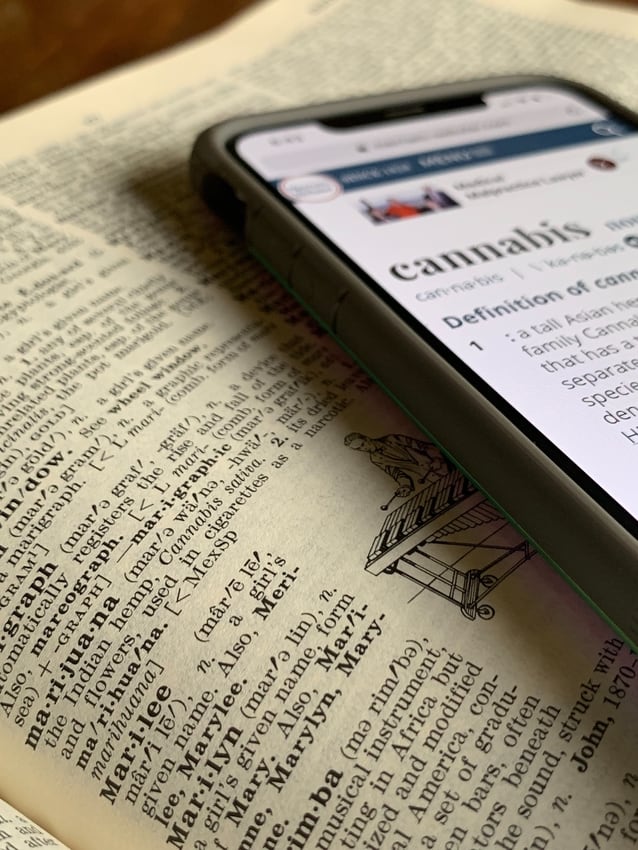 The American cannabis industry is rapidly growing and evolving with every passing year. With the increased popularity and policy changes surrounding the plant, a number of controversies have also arisen. How much testing do we need before legalizing each form of cannabis? What should the legal age be? Is state-by-state legalization enough, or is Federal legalization an essential step?

While advocates fight fervently for cannabis decriminalization and legalization measures, our collective efforts to change the industry and surrounding policies grow increasingly evident. However, in many larger issues on the subject, little can be done but wait. One debate that’s cropped up in the recent past is more easily within each pipe shop lover’s realm of control: what should you call your favorite legal herb?

While the terms “marijuana” and “cannabis” are often seen as interchangeable, a recent movement has arisen to boost the popularity of “cannabis” and kick “marijuana” to the curb. In today’s article, we’ll take a closer look at the roots of each popular term and what they bring to the table.

Where Each Word Got Its Roots

In biology, “cannabis” is the genus of three types of plants: Cannabis Indica, Cannabis Sativa, and the lesser known Cannabis Ruderalis. The word has been used as shorthand for psychoactive forms of cannabis since its designation as the scientific term in 1783. “Cannabis” stems from the term “Cannabaceae,” the scientific term for all flowering plants in the hemp family.

The word “marijuana” was first popularized in Mexico, later gaining traction throughout the United States as a common term for cannabis. Many believe that the word has Latin roots, but this common claim has recently been disproven. Linguist Alan Piper attempted to pinpoint the roots of “marijuana,” publishing his findings in 2005 in an issue of the Sino-Platonic Papers. Piper determined that “marijuana” came from one of three places – China, Spain, or North America. There’s evidence of the phrase’s early use in all three locations, but its specific origin story remains a little hazy.

In Piper’s words, “marihuana is one of the most universally recognized and used [terms] in the English-speaking world, yet its origins remain deeply obscure.” He goes on to say, “The word marijuana, together with the use of herbal cannabis as an intoxicant, is consistently identified as coming into the USA from Mexico, being brought there by migrant workers.”

Why is the myth of the term’s Mexican origin so widespread today? We can generally credit this misinformation to Harry Anslinger, chair of the Federal Bureau of Narcotics at its founding in 1930. Prior to the Marihuana Tax Act of 1937, the use and possession of cannabis and hemp wasn’t criminalized under Federal law. Enter Anslinger. In his passionate quest to crack down on cannabis and hemp, he incorrectly said “we seem to have adopted the Mexican terminology, and we call it marihuana.”

As someone so vocally outraged by the possible impacts of cannabis on America’s youth, you’d think that the man could do his own homework.

Unsurprisingly, it gets so much worse. Anslinger then spoke passionately against the plant, arguing “there are 100,000 total marijuana smokers in the US, and most are Negroes, Hispanics, Filipinos, and entertainers. Their satanic music, jazz, and swing, result from marijuana use. This marijuana causes white women to seek sexual relations with Negroes, entertainers, and any others.” This unspeakably racist and nonsensical tirade ultimately contributed to the Angslinger’s success in Federally prohibiting cannabis, lasting from 1937 to present day.

Dr. William C. Woodward attended the 1937 hearing on behalf of the American Medical Association. Woodward spoke out against Anslinger’s exclusive use of the term “marihuana” in his testimonies against the plant, accusing him of intentionally evoking the cultural stigma against Hispanic culture to negatively impact public perception. Woodward also noted that hemp industry workers lacked awareness of his bill’s disastrous effects on the then-prosperous hemp market, since the bill exclusively used the derisive slang term and failed to use the terms “cannabis” or “hemp.” Because of Anslinger’s intentionally limited phrasing, the 1937 measure missed the radar of many strong opponents to cannabis prohibition until after it had already passed.

Prior to Angslinger’s anti-pot crusade, the term “cannabis” was used almost exclusively to describe the plant, especially in academic, legal or otherwise professional contexts. The popularity of the word “marijuana” surged as a direct result of Anslinger’s racially charged tactic to limit access to the plant and criminally prosecute Americans who use it. In response to the racist and ironically anti-cannabis introduction of “marijuana” to our cultural lexicon, many advocates and pro-pot individuals have recently called for a collective shift back to the original term. Not only is “cannabis” more accurate, it doesn’t serve as homage to perhaps the biggest enemy of cannabis in American history – who no respectable stoner or smoke shop regular would ever give the time of day.

You Say Potato, I Say Pot…

Regardless of your chosen terminology, 710 Pipes has all of the smoke shop products you need and more. We carry a huge variety of popular products and accessories, like disposable vaporizers, water pipes, hats, hat pins and so much more! Stop by our Northglenn head shop between 8AM-10PM, seven days a week. We have two Denver pipe shops open daily from 12-8PM (11AM-9PM Thursdays through Saturdays) – on Colfax and on Evans near DU. Denver University students get 10% off with a valid student ID!

Still staying indoors in the name of social distancing? If you’re over age 21 in Colorado or other legal U.S. states seeking quality pipe shop products, there’s no need to leave your home. Our online smoke shop offers exceptional prices on hundreds of our top products – all deliverable straight to your doorstep. Whether you’re shopping online or onsite, 710 Pipes is proud to provide you with the very best pipe shop products on the market today.